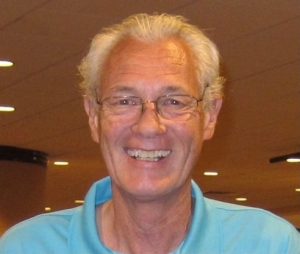 Dr. Keith Henschen, the past ISSP President (2001-2005), one of the most notable trailblazers of our field and a true professional giant in numerous respects, passed away on October 22nd. It is so difficult to say good-bye to an impactful professor, a mentor, and a colleague, but even more, to one who was a dear friend. For certain, it is impossible to completely describe what Keith meant to the field of applied sport psychology and to so many people around the world.

It is common knowledge among sport psychology practitioners that one of the most reliable measures of a consultant’s success is getting invited back by a team or organization to continue the services as new challenges arise. Keith was invited back 36 times by the Utah Jazz, more than 30 times by the USA Track and Field National Governing Body; the Brigham Young University Athletic Department; and more than 40 times by the University of Utah Athletic Department. Could these invitations be all-time records in American (or possibly the world’s) history of applied sport psychology service provision? Additionally, he also served USA Women’s Gymnastics, the US Aerials Ski Team, the US Speed Skating Team and the US Men’s Alpine Ski Team; and attended two summer and three winter Olympic Games during which he supported those teams that he had worked with. Uniformly, those he worked with, his clients and his collaborators use words such as “highest personal qualities, character, professionalism, ethics, service excellence, and long-lasting impact” when describing Keith Henschen.

For those who did not have the honor of knowing him, Dr. Keith Henschen was a professor of psychosocial aspects of sports in the Department of Exercise and Sport Science at the University of Utah for 39 years (1971-2010). His academic body of work, primarily in the areas of performance psychology, psychological skills and mental training, and sport psychology for special populations consists of over 200 articles, 40 book chapters, and 13 edited books and monographs. Keith was an often sought out speaker, resulting in over 500 presentations delivered around the world. His service to the field was far reaching, for example, serving as President (1997-98) of the American Alliance for Health, Physical Education, Recreation, and Dance (AAHPERD) and as President (2001-2005) of the International Society of Sport Psychology (ISSP). His devotion to his graduate students was relentless, mentoring 53 doctoral and 23 master’s level professionals who today continue contributing to the field of applied sport and performance psychology in North America and internationally. Keith was widely recognized as one of the most accomplished leaders in the field in both scholarship and practice. He was an ISSP Fellow and the recipient of the ISSP Distinguished International Sport Psychologist Award in 2017, recipient of the AASP Distinguished Professional Practice Award in 2013 and was the AASP Coleman Griffith Lecturer in 2014. One clear example of his innovative contribution to the field (especially, when situated historically) dealt with expanding sport psychology services from purely performance enhancement focused to more holistic personal development (e.g., life skills, well-being, personal growth) – a concept now thought of as a “gold standard” of effective practice, but an innovative and cutting-edge idea in previous decades of practice.

In emails, text messages and social media posts from those who had an opportunity to meet, learn from, or work with Keith, overwhelming sadness and loss are clear themes, but so too are gratitude and admiration for him and his contributions of the decades to our field and those within it.  A sampling of some of these include messages of sadness, reflections on the loss to international sport psychology that his passing represents, gratitude for the contributions he made on the national and international stage, recollections of his charisma, iconic personality, and genuine kindness, and appreciation for his long-standing mission to bridge the gap between academic knowledge and applied practice. Many have shared stories about the joy they experienced interacting with Keith and his wife, Julie throughout the years, and all have reflected on the leadership, compassion, generosity and both personal and professional stature of this “wonderful gentleman”.

Our thoughts and hearts are with Keith’s Family: his wife Julie Henschen and their children, Shane and Eschelle, as well as their grandchildren. So too we recognize the loss for all the students he mentored over the years, the friends and colleagues privileged to have known him, and to the profession of sport psychology who has lost a true giant and pioneer.

We acknowledge our privilege and true honor in being able to provide this memorium for Keith, as we know numerous individuals would graciously take this opportunity to pay a tribute as well. As much as we made every effort to represent all those whose professional and personal lives were touched by him, we know we have fallen short of this aspiration. We hope that a moment of silence in which you reflect on all Dr. Keith Henschen meant to you will be filled with your own personal heartfelt good-byes.